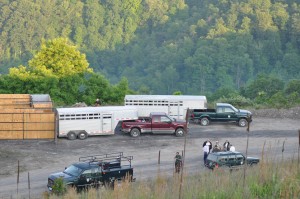 Biologist Manager at the Virginia Department of Game and Inland Fisheries on the Elk Project. The team of researchers will be using the GPS collar tracking information from the elk to estimate home range size and utilization distributions to quantify space use patterns. Greographic information systems (GIS) data will also be incorporated to evaluate resource selection patterns of the newly reintroduced elk.

Update on Elk in Virginia 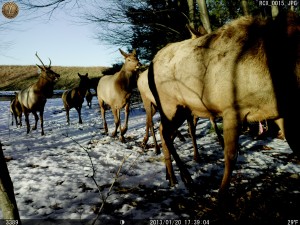 Allen Boynton, VDGIF Terrestrial Wildlife Biologist Manager for Region 3 notes that, “The elk released in Buchanan County last May are doing well. All the elk that we have observed appear to be in very good condition. Preparations are underway in Kentucky to trap and quarantine elk. VDGIF plans to bring another small group of elk to Buchanan County this spring.”

In May 2012, the Virginia Department of Game and Inland Fisheries (VDGIF) released 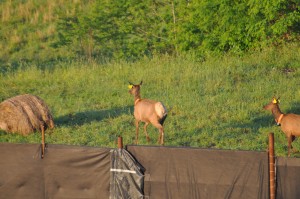 16 GPS satellite collared adult elk (C. c. nelsoni) on a reclaimed strip mine in Buchanan County, Virginia. Historically, the Eastern elk (C. e. canadensis) was found across the eastern United States, including Virginia. Sadly, the last native elk of Virginia was killed in 1855. Attempts to reintroduce elk in Virginia in the early 20th century “failed due to a lack of suitable habitat and knowledge of elk ecology”. By 1970 elk were once again gone from Virginia.

The recent reintroduction is due to increased interest in restoration of elk in Virginia since elk populations will provide ecological, social, and economic benefits to the Commonwealth. 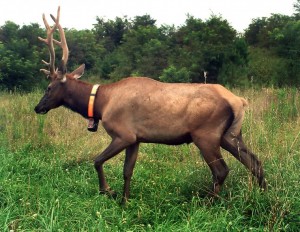 Over the next two years VDGIF plans to relocate an additional 59 elk to Buchanan County. Upon release, each adult elk will have a GPS satellite collar. “Specifically, with the GPS satellite collaring of elk, research on home ranges, movement patterns including dispersal, habitat selection (GIS), vital rates including mortality and fecundity, and nuisance and disease monitoring is achievable. This research is essential to protect DGIF’s investment in elk restoration.” VDGIF hopes to grow the population to 400 elk with sustained population control through selective hunting.